The Fiji national rugby union sevens team competes in the Rugby Sevens World Series and at the Rugby World Cup Sevens. As one of the most popular and successful rugby sevens teams in the world, Fiji has won the prestigious Hong Kong Sevens a record sixteen times since its inception in 1976. And the Fiji team won the HSBC World Rugby Sevens Series title this year for the 2015-2016 season, for the second consecutive year. This is a huge milestone for Fiji! 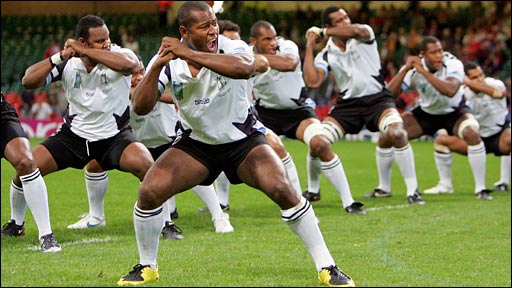 During the Las Vegas Sevens (one of the tournaments leading up to the World Rugby Sevens Series), Fiji came from 15-0 behind at half to successfully defend their HSBC USA Sevens Cup title. This was such a big deal because Fiji had just encountered Cyclone Winston.

“I reminded the boys this week that we needed to remember the people back home who were victims of Cyclone Winston and that we needed to give them something to be happy about. To come up against Australia like that was tough, but we said 10 minutes is a long time and all we needed to do was to get back the ball to have a chance to win.”

And they did. Winning the USA Sevens Cup title, allowed Fiji to accumulate the most points at the end of the HSBC World Rugby Sevens Series to be named the champions. Talk about Fiji heart.

One of the most notable players for his achievements in the rugby sevens is Waisale Serevi. He is a former Fijian rugby union footballer and coach. He is widely considered as one of the greatest rugby sevens players ever. In the 15-man game, he played for Fiji 39 times between 1989 and 2003, and scored 376 points. This included representing Fiji in the 1991, 1999, and 2003 Rugby World Cups.

While you can certainly check out the Fiji team on television and at the Rio Olympics this year, but when you are in Fiji, nothing beat the energy of a game! Whether you are or aren’t a huge rugby fan, it is definitely worth going to a match, if even only to hang out with the excited crowd.

ANZ stadium in Suva is primarily for rugby league, rugby union, and football matches. It has covered seating for 4,000 people, and an area that can accommodate an additional 15,000 people.